Today we were supposed to be up and early to catch the perfect morning light and the empty streets of Bisbee. Well, I'm not sure if the streets ever entirely empty out seeing as it's a bit hilly like San Francisco here and people need to park somewhere...and Bisbee is surrounded by little mountains finding itself in a valley...meaning the morning light is a little late in reaching the town, and it goes away behind the mountain about 3...

Making us both tired early. Well actually, it was Rich who was tired and suggested we come home in the early evening and it was me who fell asleep after laying down to rest my eyes...ahem.

But, to be fair...we had gotten an early start. 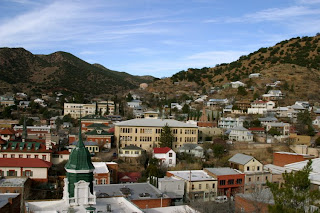 After a quick stop at the scenic viewpoint at the Lavendar Pit Copper Mine (complete with framed openings in the tall surrounding fence just for us peoples with cameras, so you can get a truly good view of the pit...and what the heck is that weird black stuff in the bottom there anyway?!?) we headed into town and proceeded to start climbing up the many sets of stairs surrounding Bisbee trying to get to that perfect point in which to shoot the whole little town. 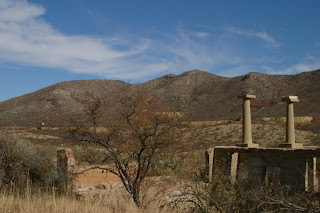 I then had a bit of a blood sugar melt-down because I had my morning juice and a bit of decaf and forgot to eat. Mix that with some serious stair climbing and I was feeling a little shaky. Usually Rich and I pack enough food for several people when we're out travelling, but we had about 3 rice cakes and some peanut butter pretzels. Luckily, the little coffee house in town was open, so I was able to get a fresh blueberry muffin.

Which was a good tie over as we headed to Toombstone, Gleeson, and traveled town the Ghost Town Trail to Pierce, before heading back to the park for some more substantial food. We were able to stop many places along the ride and photo our little hearts out while experiencing the ghost towns that are littered around the hills here. 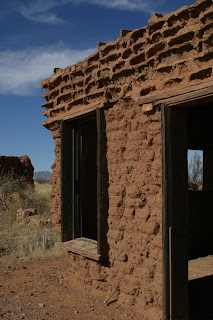 We also talked a lot about the fact that anyone could figure out where to dig to even find silver or gold...how did they know? I mean, there was a huge silver lode in Toombstone...so there was a flurry of people living there, and then the lode dried up...and poof. Ghost town. I mean, there was a whole slew of people living in Toombstone, including the Earp brothers, Doc Holiday, Big Nosed Kate and the like...and there was no water there. None. They had to go to "Millville" (named because someone built a mill there) just to get water...We were driving along at one point and up popped a cannery. A nice new cannery...which left me looking around at the desolate area wondering exactly what they grow that needs to be canned down south here? 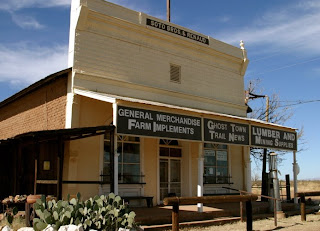 There are so many isolated towns, ranches...or just weird houses in Arizona, and I always wonder what these people do for a living? Why did they move to such an isolated place? Why are they still living in these little ghost towns? I mean, we did actually see signs for the Rattlesnake Art Studio...as seen on the Today Show.

We didn't stop...we had to get to more ghost towns and back to Bisbee to stroll the art galleries and shops instead...
Written by Chickenbells at 4:56 PM

What a great trip! I love that part of Arizona and all that it offers - it's so unique and unlike any other part! Keep enjoying your road trip - aren't they the best? : )
xoxo
VB

I totally want to go!