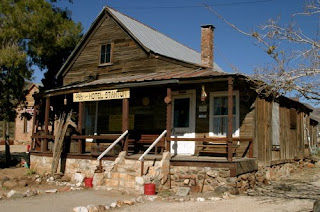 The middle of nowhere Arizona.

There's actually a lot of middle of nowhere's in Arizona...which is the perfect setting for a ghost town, eh? But, perhaps the strangest sight that greeted us yesterday as we slowly made our way down the dusty dirt road, as we rounded the final corner to our destination, was the appearance of the insane amount of RV's in the middle of nowhere...

Otherwise known as the ghost town of Stanton. 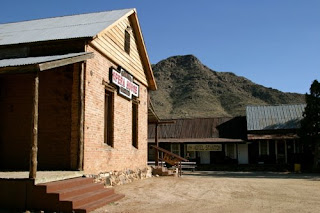 Which, apparently according to legend, someone found a whole bucket full of gold nuggets just sitting strewn around one of the washes. Which could be why the Lost Dutchman's Association bought the land in the 70's (after the gold "dried up") and made it into some sort of RV destination/park for gold miners...

Who are living out there...panning for gold. And, looking at all the pictures all around on the office walls when we checked in...well, they're still finding it! I mean, the actual Lost Dutchman's Mine is in Phoenix...so it all really makes perfect sense. 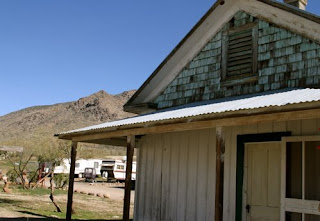 It was still rather surreal out there...beautiful to boot, but certainly surreal. Rich and I agreed that due to the inordinate amount of people in RV's at least the buildings were intact still and sort of propped up and taken care of...otherwise they may have just fallen down way out there...the extreme Arizona weather kind of does that to buildings...even if you're actively taking care of them!

I found myself walking around with a headache in the front part of my head like I usually do at these ghost town places...It's probably the energy that makes my head slightly ache and make myself feel more tired...because after we pull away, I perk up a bit and feel fine. Molly...is there something out there I can take for this? I suppose it's the simple fact that most Arizona ghost towns were founded around some sort of mineral deposits...and with mineral deposits/mining claims/making money from panning or mining came some serious corruption, jealousy and down right shoot outs. Leaving some pretty heavy stuff behind when these places were later deserted. I mean, according to our ghost town guide book...some of these places were only towns for 9 years...and poof. Everyone gone. 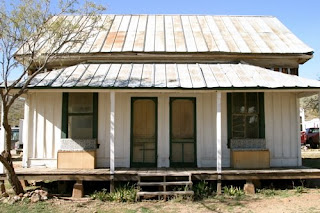 It was also quite pretty out in this middle of nowhere...and even without the gold I could almost sort of see why one would settle out there...you know? As long as there was some sort of water source. Maybe it takes a special kind of person to see the beauty in certain parts of Arizona...but, with Arizona, there's always something very unusual to see...snow, rain, sun, canyons, cactus, sand...rocks. We've got it all.

So, this has definitely been our most surreal adventure yet...but made us both wonder about the possibility of panning for gold...

For fun and profit...
Written by Chickenbells at 7:25 AM

I can just see you and Rich sifting through piles of dirt looking for nuggets... Yeah. Right. :P

I don't know if I could do the whole ghost town thing. As cool as it would be to explore and take pictures, I think it might just give me the heebie jeebies.

this state is really cool