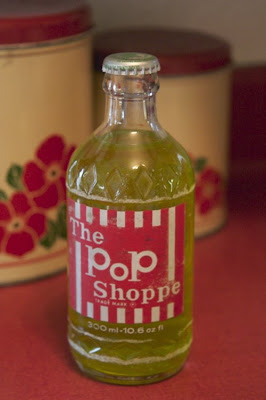 I had the amazing luck of this tiny bottle of sweet fluorescent green goodness to hop off of a shelf at the thrift and hit me in the head last week...

OK, it didn't so much as hit me in the head, as it was just plucked off of it's resting place and was immediately hoarded into my hot little hands. But, for a dollar what do you expect?

Plus, this little bottle of Lime Ricky totally matches my kitchen.

It's also French. Well...French Canadian anyways...as much as I can deduce (or as far as my horrible rudimentary French will take me anyway...You see, I've only taken Spanish and Italian...it was my mother who took French, and we grew up giggling at the few sentences she told us: "votre chapeau est une saucisse frite" and "vos cheveux sont à la bibliothèque" "your hat is a fried sausage" and "your hair is at the library" respectively) seeing as the back of the bottle says something in English and then French, and has the word Canada written on it as well (good detective work eh?)

Rich hails from the French Canadian also (although, I've not noticed any French writings on him or the word Canada, for that matter) and he speaks French. Apparently...I've heard a few phrases here and there come out of his mouth. It always makes me melt a bit. The French language is melt worthy...so much more than Spanish, in my opinion anyway. I think we only really had the choice of learning Spanish while in school. To learn any other language you had to do it on your own time (I took Italian years later before my first Italy trip. I like to be able to say hello, thank you, and where's the bathroom? in multiple languages) I think that Rich is fluent in French but seems to feel bashful to speak it, as some French girl from the past told him that he had a horrible accent or some such nonsense, so he chooses not to speak it very much (Then again, I had a boyfriend once tell me that I was a horrible driver, and that's stuck in my head and continues to pop up, even after all these years...even though I wouldn't respect his opinion now. So, I understand...)

Rich happened to walk in to Snap Snap shortly after I'd acquired this new treasure, although he didn't act as if he'd seen a Pop Shoppe soda before. He looked at it and said,

This got me to thinking...(it's so often the $1 purchases that get the wheels turning) not only how sorry I am that I will never be able to meet either his Meme or his mother (two very influential women in his life that he speaks very fondly of) but of words. Specifically, the words are spoken by family members...quite often those wise one's that have come before us. My GG who is 94 (and who Rich has gotten to meet) has wonderful words for things, and I remember giggling about them when I was smaller. (She was from Kentucky...they have a lot of great everything for the English language) Often though, these fore-family members came from a different place. Either geographically, or time-line related...and as the world finds itself getting smaller from generation to generation, I wonder how many words are lost? How many words find themselves out of date, or no longer in fashion as we globally agree to call something by one word, so we are not confused? I think it makes for a very boring language...this loss of regional nick-names.

So, Tonic it is...and tonic I shall experiment with from now on...that word rolling off my tongue in a more festive way, an easier way than Soda, Pop, Soft Drink, Carbonated Beverage, Cola, or my current word of choice...Sody. I love the use of the word Tonic in this instance as I think of a tonic as something one must have in order to be OK, kind of like medicine...Although, according to Wiki, Tonic seems to be a regional name for a soft drink, common in New England...which makes sense as this is where Rich personally hails from...

and here I thought it was some wonderful French Canadian way of saying Sody...(you gotta love Wiki)

However, I'm not relinquishing this that easy, as Tonic is too good of a word to loose...

What regional names do you have for things?
Written by Chickenbells at 7:11 AM

Categories: gastronomy (that's food y'all), my random life, people I want to know forever..., what'd you got?

As you can well imagine, the various names for 'tonic-y' things are a favourite subject of mine (note the Canadian spelling of favourite). And as a Canadian I can tell you that Pop Shoppe pop is GOOD! We used to get it all the time for big functions cause you could go to the hardware store (?) and get a big flat of assorted flavors. Orange and root beer were my favourite...oh the memories!

Yonder is alo very popular. It refers to "that place over there."

Figger is another one.

well, in Louisiana everything is coke, even if it isn't.

So when you ask for a soda at a restaurant, they'll say "what kind of coke do you want?"