Corners Of My Home... 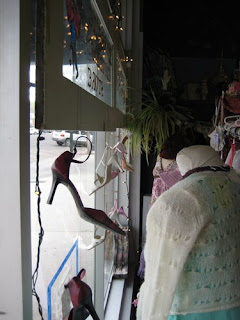 I suppose technically this isn't my home, but since it seems like I spend more time here than home, I thought I would post pictures of the latest window display at Snap Snap today instead.

I have been in a rather creative mood after the success with the skirt this week (creativity seems to be a snowball effect) and while sometimes this translates easy into one part of my life...getting it to translate into all parts of my life? Not so easy. But, seeing as I needed to change the window up at Snap Snap, now was my chance to try to carry the creativity over to work. The conversation in my head went something like this:

"...uuuugh...(heavy sigh) I really want to think of something creative to do with the window...(mentally searches brain for supplies for such creativity that I have on hand at Snap Snap, all while casting around with eyes to locate something usable) Why aren't I being more creative in the shop!?! What's wrong with me??" 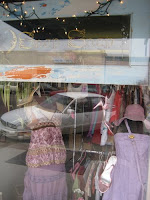 And, this can either slip into all sorts of confrontational self esteem issues, which often results in making lists of things...Or bring me a flash of instant inspiration. This week, it resulted inspiration. Now, since there are no major holidays to decorate the window for every month, sometimes I need to come up with other themes instead (yes, I've been doing it for 13 years, and I'm lucky since my stock is constantly changing, I have all sorts of other reasons to be inspired) All that coupled with the fact that since I sell all things wearable, I like to try to get that across in the form of a creative sidewalk stopping window display.

Now, if all that's not enough for you, the sun here in Arizona is quite strong, and glares through the window at least once a day for quite a long time...enough time to fade clothing if you don't change the displays in the window often enough...and the sun is also strong enough to fade shoes that are made of anything other than synthetic materials.

Yes, I know...but, I have faded many shoes in my time. And, since I only put one side of the pair in at a time...I've faded one shoe of a set, which completely ruins the entire pair of shoes...because at Snap Snap, they're buy one shoe get the matching one free (unless I can fade the other one to exactly the same shade...but alas, shoe fading is not an exact science) Which has left me no choice but to exclude shoes from my window displays... 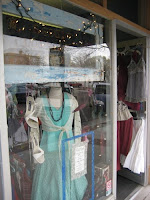 Well...hang on, because this is all leading to the exciting idea that I could probably hang shoes...so they would still be visible in the window display, and out of the suns harmful way...and Ta~Da! I present to you:

April Showers Bring May Footwear
(a concept window by the designers of Snap Snap)
Oh yes, and that's just perfect for today, because as you can guess by the glare in these last couple of photos, we have some seriously cloudy weather going on up here...In fact, it is actually raining right now.

And not just designer footwear either...

(Update: The fabric did make it's appearance yesterday. It is washed and ironed, it has complimentary fabric matched to it, and I've already completed one project....but, I'm gonna' make you wait until tomorrow to see it...

Bert and Janie arrived last night for a visit here in Prescott...they are Rich's friends and the most charming couple. Bert is a professional photographer and writer, and they both travel all over. Bert is writing an article about Prescott, and I am so very excited both to get to know them better while they're visiting our little corner of the world...)
Written by Chickenbells at 11:38 AM

Categories: corners of my home, Snap Snap...my dream job for the time being

Looks good to me. But, being a guy, that doesn't necessarily mean much... :)

The hanging shoes... Reminds me something you said on patience last week that made me laugh. Remember? Bwahahahahaha!

You never know, some day you may have a one-footed customer who needs a perfectly faded shoe!
:-D)

I need to come shopping at Snap Snap. Because I'm loving your outfits! Your store looks amazing. :D

Thanks for the peek... I'm always curious about your home away from home!