Saturday was, at it's worst points, a very off day, and at it's best points, a relaxing day full of great friends and fun goings on. 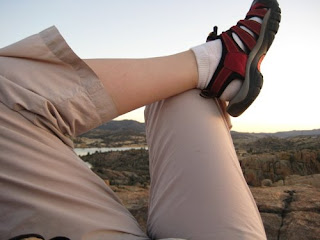 *I had an early appointment in which the main event didn't show up...but, that left time for a good friend and I to go out for a quick breakfast and chat instead...

*Rich and I went out on a drive/hike, but he felt awful physically, and I felt awful emotionally (a surprise anniversary of sorts for me, only a surprise because I had forgotten and it snuck up on me...which brought Rich and I's relationship to a new place...the place where I got totally vulnerable and lost my s_ _ _ _ in front of him? Much to his credit, not only is he understanding, but he didn't seem to mind) and we couldn't find the look-out we were driving to (some kind of weird beginnings of what looks like a superhighway through the middle of nowhere...but, there were blasting signs up everywhere, making us a little nervous...no death to the Titan thankyouverymuch) which eventually resulted in us finally giving-up and turning around with no hikes or pictures to show for the hours in the truck...but allowed me the time to wash and clean out the car, chat on the phone with friends who agreed that the day may require a do-over, make the fresh strawberry pie, plant flowers in pots at the house, and meet up with Matt and Megan for some much needed lunch and R&R...

And then Rich and I decided to throw caution to the wind, and try it again...try a do-over only this time we went out to the rocks where we knew we would be successful in finding what we were after. This evening, I got comfy on a rock that was gently radiating the heat it had stored up all day, and kick back and watch the light slowly change as the sun put itself to bed. 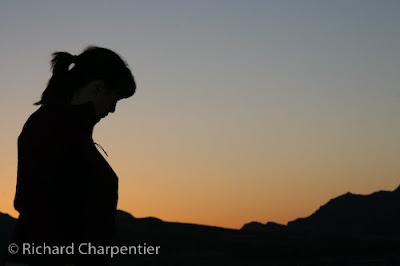 Rich also wanted to experiment with a photo technique he's been reading about, and I am finding myself the willing subject in my constant need to find some balance between being in front of the camera (thus looking relaxed and natural) and smiling like I've never seen a camera and having 4 chins pop up for no reason whatsoever...

Saturday was a day with a million little lessons. Saturday was about not being able to meet set expectations and having to be flexible. It was about giving up when things weren't working and walking away from it for the time being...and then it was about finding things that did work better and relaxing into those moments fully...and then retrying, and reconnecting in the end and allowing whatever was to BE to just BE. 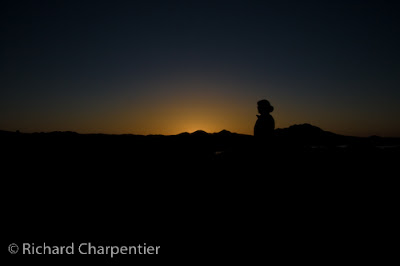 Okay...I'm not implying that there was drama because of these silhouettes that Rich snapped of me, it's just that silhouettes always seem so dramatic...Don't you think? This do-over part of the day was actually drama-free.

I happen to love these shots (a little more than the one's he took where you could see all my facial details, but that's because no matter how cute Rich thinks I looked, I thought I looked as if I could use some make-up, a hair brush and a nap...and not necessarily in that order) and there is not an extra chin to be found in any of them...

I wanted to let you all know that Rich wrote a wonderful post about Backing up your computer...and how to do it. I have seen so many people loose important things off of their hard drives, and to be completely honest, I knew that backing up your computer was important 2 years ago, but I had no idea how to even go about doing it...So, click on that link up there (it's the line that is a different color) and it will take you directly to the post. He has also offered to make a podcast about this subject if you have any specific questions...just leave him a comment. He's a wonderful teacher, very knowledgeble, and very easy to understand...
Written by Chickenbells at 7:37 AM

Categories: My Arizona, my random life, people I want to know forever...

Glad the day had a happy ending.
Hugs, my friend...

The pictures are beautiful -- as are you. (And are those Keen sandals?!)

Sadie...love the sillouettes!!
Nice shots! Good for you for putting your feet up for a spell!
: )
VB

Those silhouettes are really cool. But I know what you mean: I'm so critical it's all self portraiture in this parts. Hee.