Life in Redoux :: It's all in The Details

This seems to be the theme of my life as of late.  When it comes to change, it can either be the things you can't control, the things you can...or even the delusion that you think that you actually control anything at all.  In my case at any rate...you think I'd get it by now as they say the only constant is life is change, eh?

Sometime in the middle of moving and loss and letting go the letting go theme just waved its hand and started to gallop out of here...in droves.

The whole thing that started it off was the purchase of a new TV.  This is something that I have been wanting for a while now...which means I've been researching and asking friends and studying, and decided to make the leap during the week of Super Bowl (apparently this is one of the best times to purchase a new TV because of the sales)  I love my new TV, shamelessly.  SO much so, that I'm almost sad it's not smaller and I can take it with me wherever I go...

It also meant that I had to get rid of my Mexican pine armoire I used to house my old TV...so out it went.  And in came a whole new console.  Something a bit more Pottery Barnesqe, more me, more modern and sleek...and oddly enough, black.  I had along with my TV research, looked at new media stands and I was very attracted to the black ones for some reason.  I have no idea why...but I did end up ordering one and having it ship directly to my home (for free...thank you JC Pennys!  Dina also said that the same people who design for Pottery Barn often do have items at Pennys...in case you were wondering)

I assembled the new console and TV in one night (including painting the ONE last green wall corner in the living room that happened to be sort of hidden by the old armoire that has NOT matched my living room now for ohhh...5 years?  Ahem!) and hooked everything up and sat back to enjoy...and then looked at my coffee table. 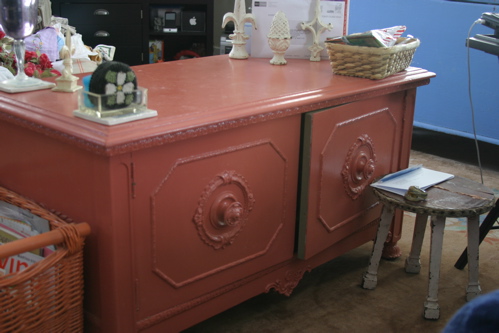 I love this coffee table...it's old, it's Italian and what's not to love?  I purchased it from my mother years ago and covered its very distressed green paint with terracotta...didn't love it, but have decided to live with it.  The details are incredible, and it's a lovely size, and there are two doors that open and give me a ton of storage.

I was using this storage for blankets, but have now switched it to DVDs...moving an armoire you've stuffed things into for years does take away a large amount of storage...

But, it was calling out for its own redoux, which is exactly what happened. 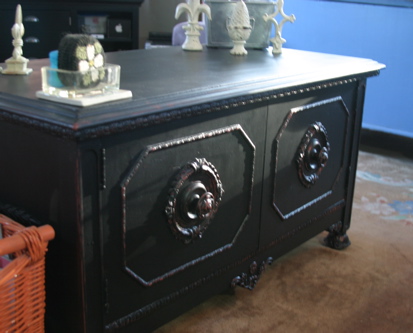 Well now.  That's so much better.  Seriously better.  The kind of better that makes me smile every time I step into the room.

I also love the rich look of black paint with a little red underneath, and since I was already working with terracotta...I decided to try a little experiment of painting and then taking paint off. 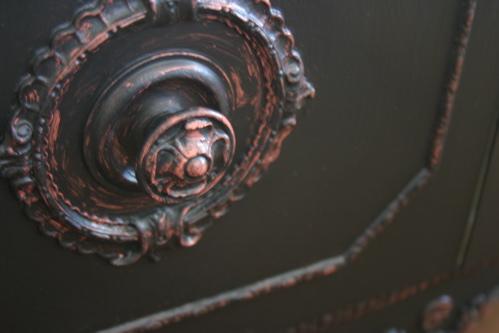 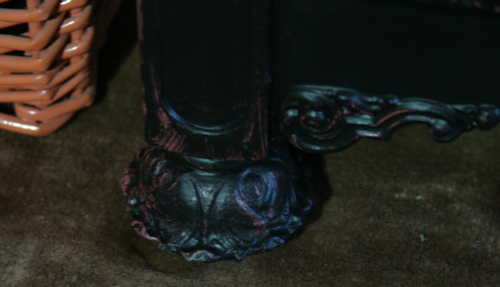 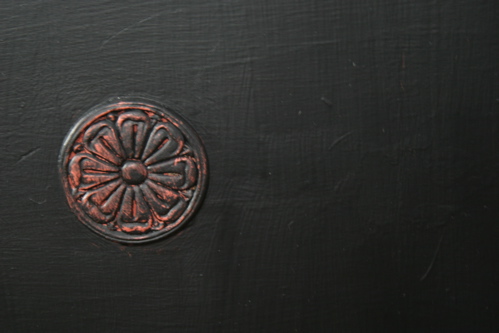 I really love the way the table turned out...I have always enjoyed the details and lines of this piece and I think with the paint and rub technique, I've been able to coax them out a little more...

Which is good, because I've got some major big plans for this house, and needed to practice some new painting techniques.  New plans...change...All of a sudden.  Oh yes I do...

(Including the crazy blue blanket chest in the background of the picture of the coffee table...bah!)
Written by Chickenbells at 8:02 AM

that inspires me to do a little makeover of my bedroom furniture...so cool!