...As long as people hear it through their feet instead of their brains.
-John Phillip Sousa
...And there was a whole lot of toe tapping last night at 129 1/2...our local jazz eatery here in town. 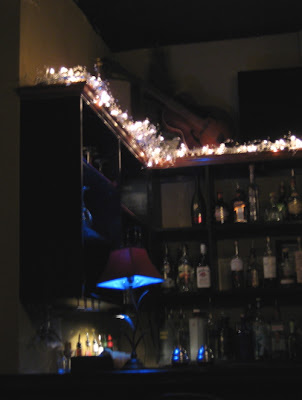 ...I'll let you in on a little secret, I happen to know a very talented jazz musician that goes by the name Steve Annibale...mostly because that is his name. I've been lucky enough to know Steve for a long long time (which is weird, because it was his birthday and he's only 23...and I swear we've known each other at least that long...) because he is friends with My Pal Amy's brother...so, we all have hung around each other for a few years anyway. Whenever I know Steve is going to suit up and play, I try to make time to see him (apparently he's going to be at the restaurant on Tuesdays through this month as a duet...that would be him and the piano guy, I don't think he's going to split into another person...although, after what I saw and heard last night, I wouldn't be surprised that he could do just that.) 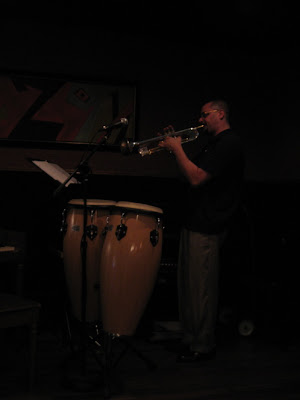 The thing about Steve Annibale is, no matter how young (or old) he is, he is one jammin jazz man. He plays a myriad of different instruments and sings...and the guy is incredible. I have personally been lucky enough to see him perform for many years, and I have a list of favorites that I can shout out if he gets confused about what to play (like, the fantastic mambo song he wrote or Minnie The Moocher...which kind of means whoever is sitting next to me has to listen to me sing along with him...I don't know what it is about that song...go Cab go) and he hardly ever ever rolls his eyes.

Last night's performance was extra special though...because it was Steve's birthday...so we all gathered to celebrate with him...family and friends.

(Steve told us that he wanted the 3 F's for his birthday...food, family, and friends...although, I didn't see him eat...but the rest was taken care of in spades) 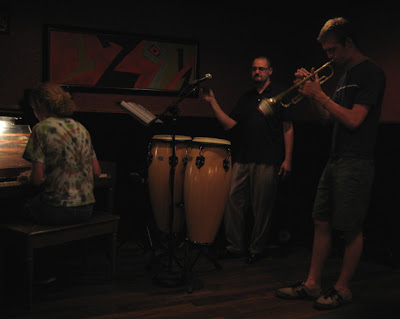 And the place came alive...musicians from all over came out of the woodwork to set up and jam and celebrate with Steve...and jam they did, much to our pleasure. I have never before been in a room of such talented jazz players and was myself constantly amazed and delighted. I found myself thinking more than once, that you would have to know how to play your instrument pretty darned amazing to just stand on stage and perform whatever came into your head...and have it turn out that good.

I just found a rhythm to tap out with my feet and sat back and watched...my favorite thing to do when watching Steve.

Thank you Steve...for a fantastic night...
And Happy Birthday!!

(Oh...and PS Amy...Steve got out the shaky egg right after you left...I took that last picture just for you...)
Written by Chickenbells at 2:14 PM

Categories: Our many tallents, people I want to know forever...

this was so great, they were absolutely fabulous..thank you so much for inviting me...