In The Fading Light...

...of the summer afternoon, I often find myself on the porch of Foolsewoode...drinking in the last bit of sunlight...watching it shoot through the clouds that often cover our skies. Clouds that make me delirious with joy. I can sit and watch clouds for hours, and I have been known to pull over and grab the camera that sits next to me in the car, to capture such skies. 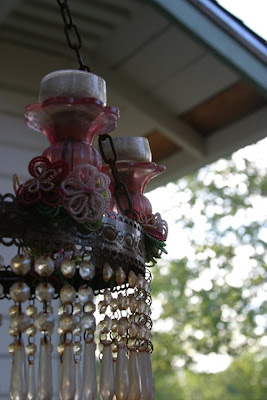 Sometimes this makes me late to places that I have to go.
It's always moments like this...in this light, that I feel I can do anything. That anything is possible...and it's all at my fingertips ripe for the asking, if I can just compose the question.

Because the dusk is magical that way...chasing away the sunlight before it turns to dark and the stars come out to visit and play.

And then, I totally forget all about questions...my mind drifting elsewhere. 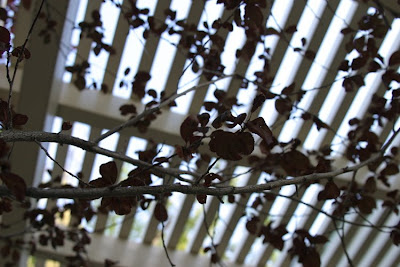 Sometimes it drifts to the corners of my home...to the boards that were replaced many years ago when we first bought this house when we put on a new roof, back even before the we turned into an I. And they still aren't painted? (this is the impatient part of my mind that is logically always trying to whip me into some semblance of shape and order)

But no. They are still not painted. Maybe sometime this year? 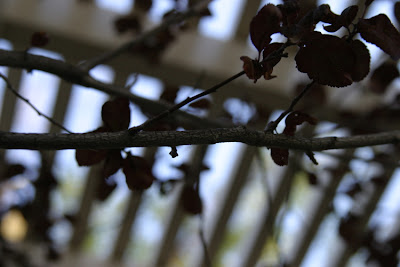 Instead, I jiggle my feet which are propped on a chair, and look up and through the branches of the ornamental cherry tree (although, I suppose that isn't fair...because once? Once I found a cherry hanging around in there for no apparent reason other than it just grew that way) 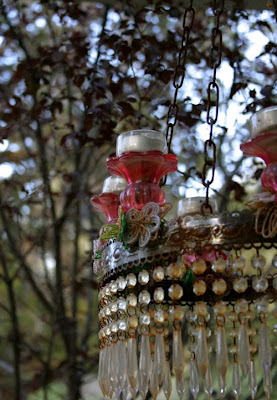 ...and then I remember that I'm supposed to be reading. I just started the book Practical Magic...it jumped off a shelf at a thrift, and I was happy it didn't land on my foot. So, I picked it up to take home, and have been lost within the pages since.

Maybe I should ask the dusk to grant me the wish of being able to write a magical story such as this...or lyrics like Iron and Wine. Which is playing in the background.

I have a set of outside speakers that look like rocks, you know.
They match the large rock that my patio is built around (my house has a couple of rocks like this in it, rather than working to remove them...they were just sort of incorporated) A fun game is to turn on music and watch new guests look around in confusion as to where the music is coming from. 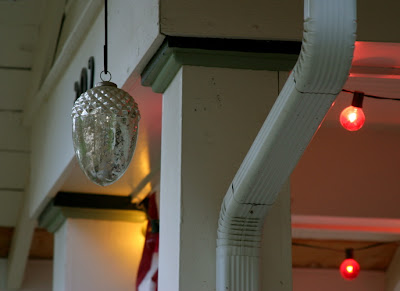 And then my attention wanders over to the portico...and the mercury glass acorns that adorn the entryway to my home. I immediately compose a shot in my head...and jump up to grab the camera.

And then I get impatient again, because as I have the shot already set in my head, and I happen to know it will look better when my colored twinkle lights come on. So, I devise a plan...and come back and wrap my nightgown around the timer (my timer comes on just after dusk, and turns itself off a few hours later...controlled by some high tech light sensitive sensor) and sure enough, after the nightgown is in place...the lights come on. Although, now? I don't know if I got the shot I had intended...

But I celebrated the magic of the dusk anyway...

And then I vigorously shook out my nightgown before I retired for the evening inside so as not to be covered with spiders later, because I don't care how amazing the light is...no one looks good covered in spiders.
Written by Chickenbells at 6:00 AM

Categories: corners of my home, my random life

what a beautifuly peaceful place to be and think and feel..good for you! I love your pictures!

Rebecca is Thrilled by the Thought said...

Lovely...I drifted away into a dreamland as I read this.

running around taking photos, without a night-gown, in spider territory? I bet that was a show for the neighbors. :-D You live dangerously for a sick gal!

Tom...good heavens! I was wearing SOMETHING...just not my nightgown. Although, I suppose, you never know with me ;)

If this is the view you have in the late afternoon, I can understand how a person can get lost in thought, especially with that beautiful windchime swaying above one's head. And only at Halloween might one possibly look good wearing spiders, but even then...Hope you are feeling better :0)

My god in heaven....YOU'RE BACK! IT'S REALLY YOU AND YOU'RE BACK!!!
I adore this post and can totally relate to it all...and how simply sweet of you to include a couple of shots of the item that I first fell in love with when I first fell in love with you...uh..in a girl-friend kind of way..like best friends..not like Ellen Degeneres way..ya know...I'm just saying...the beautiful candleolier!! Sadira, I simply must come up for an evening on your porch with acorns, candles, wine and dusky clouds drifting through thoughts!!
Love you,
Carol

Hello Sadira!
Just wanted to pop over and tell you that you are the winner of the Charlotte Mosaic Cupcake! :-)
Email me your addy!

i love your place.. so much!