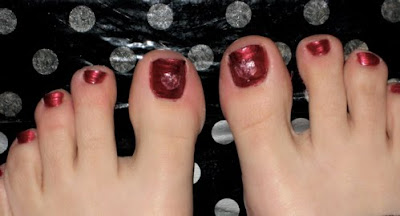 I gave myself a pedicure this weekend, and I thought it would be a fun idea if I did it more Valentine's Day theme...so I got out a toothpick and painted little pink hearts on the nails of my big toes.
Um.
Now.
It may be that I'm totally delirious from battling The Winter Cold/Flu:  Part Deux...the chest cough years.
Or that it's hard to paint anything with a toothpick as a brush...and onto your toenails.
Or it may be that I was channeling Lord Voldemort (only because I was watching Harry Potter:  The Sorcerer's Stone...)  cause I'm telling you?  Upon further scrutiny while said toenails were drying...the heart on my right toe?  Looks like Voldemort's head when it was on the back of that other guys' head under the turban?  Which was ick in the movie...
And even further ick on one's toe.
Specially since my toes were meant to be all romantic this week.
Drat.
I just hope this doesn't bode for a scary Valentine's Day later this week.
And then...when I decided to finally break out the Digital Elph today to take these pictures?  I was all concerned about the flash ruining them...because usually I don't use a flash if I don't have to.  But, I think flash on the toes seemed to be the only way I could get the full Voldemort Peducure feeling.  And then I thought, of course the flash would be fine...my toes don't have eyes.
Mostly.
This was after I had to redo the photo shoot because although the first pictures were dim...they were still useable.  Only, there was something weird all over my toes when I was editing them in iPhoto.
It was sock fuzz.  Seriously.  From a pair of socks I am continually worried that the heel is going to wear out of, so where all this extra sock fuzz was coming from is a total mystery.
This has been a very trying pedicure.
Written by Chickenbells at 1:43 PM

Categories: Our many tallents

Sitting here in the front dinette of the airstream watching snow fall all around me. On the skylights... past the panoramic windows, etc....

Chased away my grumpies.

Oh dear! I had my toes done this weekend and I also had some problems. In my case, I just happened to put my socks and shoes on too soon, drats!

Luckily, I saw my friend that same night and she's a nail technician. She brought over her tools and fixed the problem asap :)

Voldemort's head, huh? That's a very unusual problem to have on your toenail...

*snort* You're so funny.

A romantic weekend? Yeah, send me email, darlin. :D I want details. I know, I owe you mail, but um, humor me. :D

LOL!!! Man, I always know that I'm going to get a good laugh when I come over for a visit!!! I don't know which is funnier. The toes or the eggs. All i know is You crack me up!!!!
xoxoxo!!
Michelle