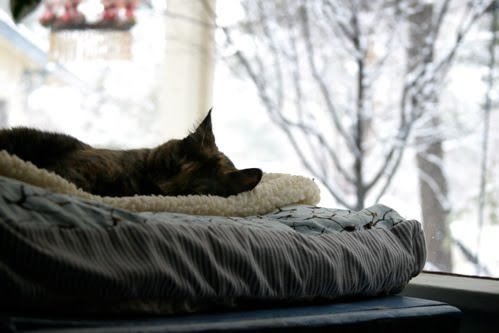 Finding myself exactly in this position this morning.
Well.
Not on that particular bed per say...
That's Mena's heated window bed.
(yes she's sleeping on a down cushion...we are big believers in down here at Foolsewoode after all)
I was more in my own fluffy down nest bed.
Rudely awakened by a beeping alarm during the middle of a not so particularly good dream (if I remember correctly) but woken after thinking, "it's still dark outside!"  Which it usually is when I wake up to shuffle off to the gym.
I was rationalizing that I could easily skip today and make up today on Friday instead, but realized that I would only probably sleep another hour or so...and probably more fitfully than restful.  And I notice that I don't have the same energy throughout the day when I don't work out...and I also remembered that I am currently staring into the face of a birthday with a zero at the end of the first number...and if not now, when?
So, I left the kitty sleeping while I got my groove on to Universal Religion 3...
Which also happens to be perfect driving music if one happens to be scaling up and down Mingus mountain towards the historic mining town of Jerome Arizona.
It's the rhythm of the music that matches the curves of the road that really does it.
Which happens to be the exact same rhythm that makes me lift my feet a little higher and faster while participating in cardio...
I'm not saying that it totally erases the yawns...but it certainly helps.

PS  It did not escape my attention that Armin Van Buuren released Universal Religion 4...It's currently being downloaded from iTunes.
Written by Chickenbells at 7:23 AM

I am with you...I TOTALLY feel better and a new, fresh burst of energy when I work out vs. if I do not. Kudos to you.

And yes...I know all about wanting to stay under the covers and jus sleep! hee :)