Corners of my Home... 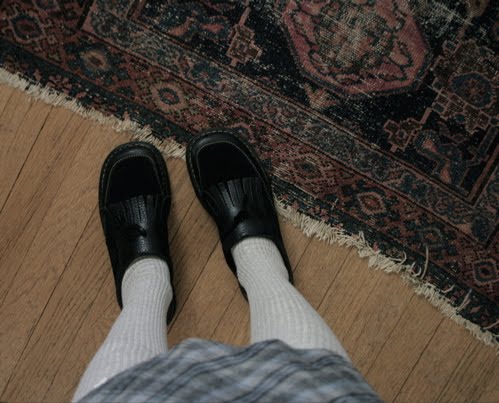 The view:
Looking down towards my feet lodged in the entry way of Foolsewoode, and the combination of a wonderful vintage and very worn rug that lives there...placing itself over my wood floors, which are also very vintage and worn...and which need to be re-sealed.
I'm thinking this will happen sometime this summer.
(I may not even sand them first)
(shhhhh...) 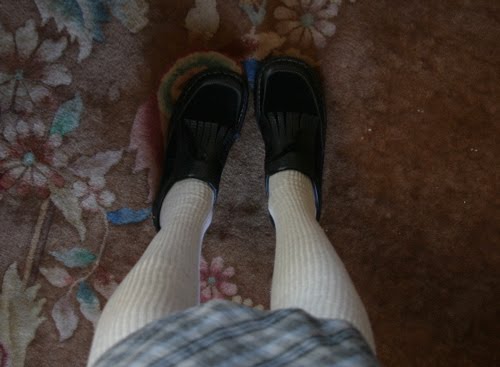 Again with the toes.
(I really wanted to show off my new plaid wool skirt)
Standing on the 1920's hand tied Chinese silk rug that was picked up at a yard sale.  My mother and I watched it being brought out from the house and saw them unroll it to reveal a small corner of it which a plant had obviously been set on and watered repeatedly, thus causing a hole.  Upon leaving this yard sale my mother turned to me in the car as we drove away and said, "You know?  That rug would match your house perfectly...did either of us ask how much it was?"
Stop.  Back up.  Get out of car.
When presented with the question of price, the lady told us the history of the rug and finished with, "...I wanted $40, but I'll take $25..."
And we hadn't even asked for a discount as we both thought it was a steal at $40.
This rug covers almost my whole living room floor (which is saying something, but then again, rooms were much bigger back in the day) and since it has the hole in it I don't feel bad vacuuming it (which you're usually not ever supposed to do because it ruins the threads and the pile of the rugs and makes them wear out faster...but my house is really meant to be lived in...vacuuming on, walking on, and spilling on as I go about my day to day life)
When I bought the rug and we loaded it into the car we realized this rug weighs possibly as much as a dead body.
It is also about that cooperative when rolled up.
Written by Chickenbells at 3:13 PM

Categories: corners of my home

Love the shoes. And the dress. So cool.
~Roz