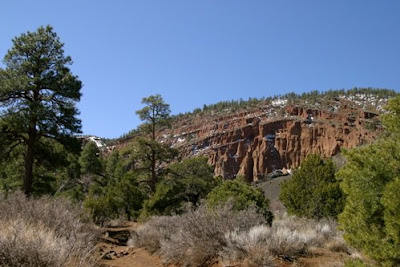 Yesterday I was a bit away from the computer...in the form of One Who Hikes With Rich in and among the Hoo-Doo's (that is, if we were to put a Native American name to the whole thing) Yeah. that's right, I said Hoo Doo. Which was nearly impossible for me to remember leading up to the hike and shall probably be banished from my brain once again as I hit the publish button on this post. I kept walking around town before said hike saying things like, "Rich and I are going hiking somewhere...um, that has to do with volcanoes up in Flagstaff...but not the lava tubes (which are these big underground tubes that you can go climb around in that were created by lava...) it's something else...but, I have no idea what it is" Apparently I'm not paying attention very well...and by not paying attention very well, I usually make up a bunch of inaccurate things instead: 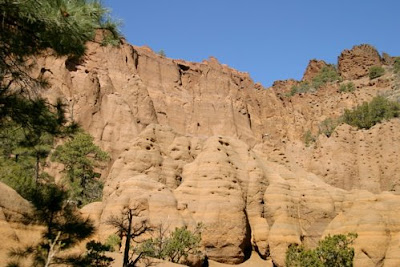 ye-haw
which all about brought me to my knees...making me want to get a big horn, don my lederhosen, plant myself on the side of the petrified lava flow and exclaim: 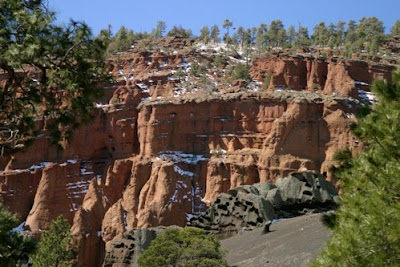 instead.
But alas, I had forgotten both my large horn and my lederhosen (not to mention my flock of sheep) But, according to Rich...I still shredded up the trail. I honestly don't know if it's because I spend a majority of my mornings at the gym and it's finally paying off...or if it's because I am so excited to get out on a trail. Well, whatever it is, I enjoyed myself at the Red Mountain Geological Preserve (home of the Hoo-Do...which are actually those pointy rock formations, I think anywat, likt they have on the Thunder Mountain Railway at Disneyland...which is a lot of fun. Almost as fun as hiking a trail and without all the annoying long lines...but, without a fast run away train, so there's that...) 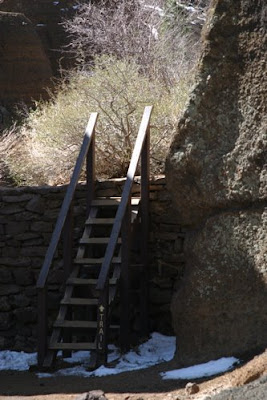 It was a pretty easy hike in, with a very cool ladder/stairway thing leading to the real Hoo-Dooie part of the canyon (that I climbed and then immediately put in the back of my mind to stress out about until we went back down. I honestly do that kind of nonsense a lot...which is why I am currently reading The Power of Now...) (I am also loving how there is a sign on the post that says trail...with an arrow pointing straight up...they got that right!) and it is honestly fantastic in this area. It was cool enough not to get too hot (and windy as well) which probably also explains why there's a lot of snow still sitting on the ground.

Totally awesome back in the canyon though. Everything is very large...which prompted me to call Rich "little man" and take pictures to try and illustrate how BIG and impressive it all is...

We stopped for a bit to explore and have some snacky treats...and I stopped to throw my arms around a big pine tree (must be the endorphins from all the hiking) to thank it for being in this fantastic place...while Rich snapped a picture (it's on his site) which immediately made me think I had an enormous rump and the gym is NOT paying off (then again, I think I have a wardrobe of ill fitting hiking things...often things that fit on my waist are ginormous everywhere else...so that leads me to believe that there needs to be more ab work...otherwise I look as if I have wrinkle butt) and I had a chance to snap a pay-back picture of him using the mountain of dried lava as a slip and slide (all while saving the new camera from utter destruction) but, I didn't have my camera out fast enough. I don't know how Rich finds all these great places, but I'm glad he does! 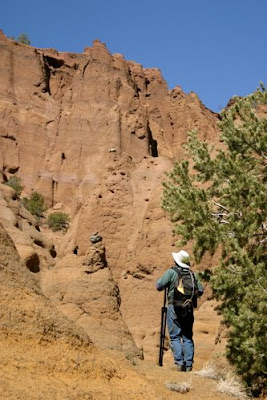 I think it's also fair to say, even though I lived in Flagstaff for 5 years, I never saw this great location...but, also we must remember that Sadira is rather new to liking the hiking thing as well. By the way? The new Keen's totally rocked! Paired with a pair of Fox River cross training socks, I had no foot fatigue, blisters or soreness...

After hiking out, we ended the day in Flagstaff at the Life is Good store, where life is indeed good, but a bit overpriced. And then on to New Frontiers where we picked up some yummy lunch, which included these fantastic rolls with avocado and a lot of other good veggies that we both love. I thought to ask the nice Sushi chef (yes, they have a sushi chef in the market) if they sold these rolls in the store (because with Rich's egg allergy it's very hard to find wraps without egg in them, if you can believe that) and lo and behold...they had them! I'm not saying our New Frontiers will have them here, but it's a lead at least!

All of this may prompt me to make good rolls for Easter and call them Hoo-Do rolls...
Written by Chickenbells at 11:24 AM

Categories: My Arizona, project reduce the tushie..., The Road Trip...

Um, is that SNOW under that groovy ladder? What a beautiful hike.