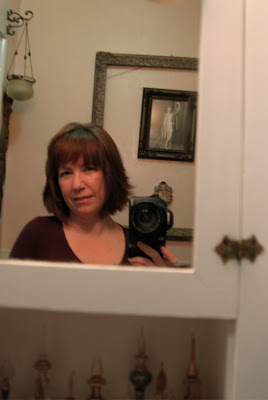 I don't suppose many people get haircuts for the holiday...or maybe they do?

Ms. Dina and I were talking about getting our hair cut not too long ago...she made the jump before I did, donating 10 inches of hair to Locks of Love. If I would have not cut my hair recently, I probably could have done the same thing...but, I didn't even think of it. Rats. What a wonderful gift for someone.

She called to tell me she'd made the leap and that she looked like Iman.

So, I decided to run to the hairdresser and got my hair all cut off. I know. It's kind of strange seeing as I didn't really like my last haircut and wished for my longer hair back. But you know? I actually love this cut! It's so fun...

At least I will look very kicky when Santa comes down the chimney next week...

Of course, I got my hair cut less than 24 hours after we took this year's holiday pictures for my cards...so they don't reflect the new hairdo.

In other news. This snowstorm of epic proportions we're supposed to be getting? Where is it? Everyone is rushing around like crazy people stocking up on supplies and nothing is happening. There was a two hour delay for school yesterday (and I know of someone who couldn't get out of their driveway...making me wonder if they've relocated to Alaska) and the only place I even saw snow was in my neighborhood and the hills surrounding Prescott (because I live in the hills surrounding Prescott...which is silly, because I actually live UP a small hill in Prescott, can see the downtown and may be able to hit it if I threw a tennis ball, and there's always more snow waaaay up here...it's very silly really) and all it really was, was cold and slushy. It also snowed all day yesterday, but with no sticking. It snowed, in fact, until it actually got cold enough to stick. Then it stopped. Now they're freaking out on the news and telling us that there's going to be more and to grab our flashlights and batten down the hatches...This makes me raise my eyebrows a bit. It looks as if Flagstaff has gotten quite a bit of snow...and it's cloudy here...but, I'll honestly believe it when I see it.

(There. Is that enough taunting to have Mother Nature make me eat my words and get just a little snow here to stick around?)

(they actually called 2 snow days in Flagstaff and are likening this snow storm to the one in 67. They've gotten one foot of snow...in 67? They got EIGHT feet of snow...they had to dig tunnels through the snow so people could walk around. That would also be the year that Prescott sold it's snow removal equipment to someone and they had to air-drop food into town...apparently they also had to postpone Christmas because no one could get out of their homes to visit with family...it seems as if we've gotten more dramatic about the weather here)
Written by Chickenbells at 5:18 AM

And yeah, we are totally dramatic about the weather here. I remember growing up when all the streets of P-Town were iced over and you had to walk to the store to get food. It wasn't crazy, it was just the way it was. Snow days were called when people couldn't get to school.... :)

Eight feet of snow????? Daaaaaamn. I bet they had to cancel Christmas. Santa couldn't find the houses in that much snow.

the new hair cut looks awesome..and my goodness the weather in 67' sounds aweful, hopefully that wont happen, but I know you wanted some good snow, so ::crossing fingers:: I had my fill of snow (stuck in the house for 3 days was not fun..)but that was only because people didnt know how to drive in the snow (we dont have frequent winter weather here..haha)..I hope you have a wonderful (some snowy)christmas..:)

I LOVE the new haircut on you! It is very young and refreshing! I know that sounds strange, but that is what came to mind.

We received your cute card the other day-thanks! Wishing you a wonderful holiday and hope things are going much better for you!

I like this new hair cut. It looks fresh and rather stylish!

The new hair is FABU! Really like it on you. Very flattering. :D

Alsoooo, cutie hair for sure. Santa might take you back North to meet hi elves ;)

OH YEs, I am waiting for the snow.. We have had torrential scary winds, no power all night and lots of rain... But no snow...

OH MY GOSH!!! I am reading those snow stories from 67 - And selling of the snow equip. In prescott. Too Silllly! Well, I am sure they learned their lesson :)

Let me know when you get some fluffy white stuff... ;)

Love the new holiday 'do!