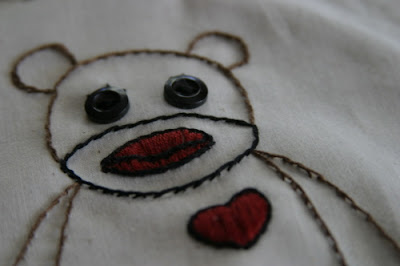 The completion of a little project for the soon to be littlest part of our circle...
A quilt square for Megan's Babies Quilt.

When Megan sent out requests for all of us friends and family to participate by making a square for the quilt, you bet I jumped right on it!

Actually, she had to ask me in person, and I got a bit sheepish about the whole thing (there may have been some head hanging involved) I have no idea why that is, because I love to quilt and sew and embroider (embellish, and applique) but if I get into some deep seeded meaning about my fear, I will no doubt spout something about me not being creative lately...which isn't necessarily true, I happen to be being (phew sentence structure and grammar?) creative in different ways than I usually am.

So, seeing as I am on totally one to be on top of things, and never do anything at the last minute (don't look at Sunday's Post...) I opened the envelope the moment I got it at the beginning of October (although come to think of it, it could have been sometime in September) and went right to work...sketching, designing and creating.

I actually opened the envelope last Thursday in anticipation that I would embroider and hand the square over to her when I went in for my Thursday coffee date (sometimes I just have those dates with myself...) and because the square had to be to Megan by early November (see? I was like three days early here) When what to my dismay popped out of the envelope when I opened it, but a muslin square with a hole in it.

I took the square to Megan, and told her my tale of woe, while assuring her that I did not in fact, put the hole there myself just to use as an excuse as to why I wasn't handing her a square earlier (but this may be a good excuse for any future endeavors, eh?) and she handed me a clean, fresh, and intact square the next day.

I was a couple of days off my scheduled creativity. 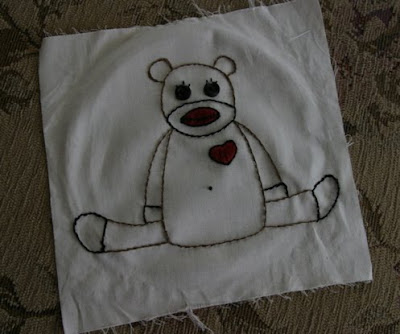 Luckily, it didn't throw me off creatively and I managed to pull the creation of the square off...I got the square all made up and ready to hand over during The Day of the Dead parade. I didn't actually see Megan during that...so I handed it over to her on Monday instead.

(oh, well...not really. I had to wait for the heater guy to come and repair the electrical box or switch or system or something on my 20 year old heater...which cost me almost a million dollars...so, I'm assuming it was the electrical system. I have to say though, that Aardvark Heating and Cooling is awesome at fixing these old systems and my heater is humming away in a much better fashion now...)

So, Tuesday it was.

For an impromptu coffee date before work.

And only November 3rd.
(three days after the start of November)
(technically still early November)
(but to be fair, I am taking credit for having it done November 1st)

Categories: Embroidery, Our many tallents, people I want to know forever...

That is just the cutest!

nice work! i totally love it and it is the perfect square form Aunt Sadie!!

Whether 3 days early, late, or in between, the sweet little bear on the square had to be all that mattered, once presented. ADORABLE. :)

Your ability to flex out deadlines like a well oiled yoga teacher leaves me breathless!

(are you sure you don't work for the government?)
:-)
LOVE the last skull pic in your day of the dead parade post below! I'm totally going that route next year...when i put up my day of the dead display on the 31st or the 3rd. Sokay, my relatives expect it of me anyway....

Adorable! You know, some of my favorite baby clothes of Soren's are the sock monkey embellishments. YOu should honestly consider a line...