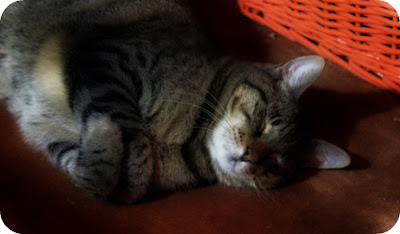 I've been a bit stressed lately...what with trying to acclimatize the kitties (there was a surprise fight that I almost saw the other night resulting in Mena getting a small tear in her ear...which then resulted in me sobbing over being a bad kitty mama...which has resulted in the cats being more supervised and only allowed to be out together when I'm home...which has resulted in me being more stressed, but feeling a little safer as well.) Um...where was I? Oh yeah...along with other life-type things, my back was feeling rather knotted up.

And I was very stretched out and relaxed afterwords. I also found out what Ashtanga Yoga really means (according to my instructor) It's a sometimes quicker style of yoga to tire you out. That way after you practice, since your mind is tired, you can just be.

Hard enough to be sore today...

...And hard enough that I woke up sometime in the middle of the night on my back, laying there in the tree position...my arms carelessly thrown above my head in total relaxation surrender. Out of all the balance moves, I'm sure this is the best one to do in your sleep...and I was pretty happy that I wasn't doing King Dancer. I mean, I like King Dancer just fine...when I'm awake and standing...but I think it may be a bit hard laying down.

At any rate, I've decided that I'm calling this REM Yoga.
It's my newly invented yoga style...a style of yoga to do while you're asleep.

Which is really too perfect for those of us who don't have enough hours in the day to squeeze in a yoga class...
Written by Chickenbells at 1:34 PM

sorry I missed Yoga last night :( but glad you were able to relax a little :)

You're so devoted, you're practicing in your sleep.

When I was taking intensive Hebrew in Graduate School, I found myself translating in my sleep.