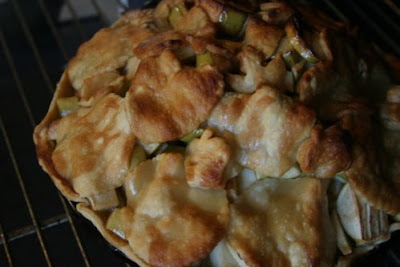 Because cake just isn't quite fall enough for me right now...

Plus? I bought 8 Granny Smiths, and I really think they invited a pie instead of a cake...After premeditating a directionless weekend full of things I personally wanted to do with no agenda whatsoever, I found myself spontaneously loading a bag with apples at the grocery in anticipation of making a pie this weekend.

(I also did the same with some potatoes, onions, and broccoli...only for a soup, which did not happen to get made. Yet.)

After an invitation for movies and pizza with Ms. Megan this was issued on Saturday, I decided to get crackin' on this baby, so I would have something special to bring with me. Up until that point I had gone to early morning yoga and then flopped on the couch for some serious Will and Grace viewing...with a run to a local yard sale to pick something up for my mother that she had decided she needed (more on that at another point) thrown in for good measure.

I tried an entirely new recipe and it was a hit with everyone who tried it. I liked it as well, although I would consider cooking it 45 minutes next time (instead of the lesser 35 minutes...there were A LOT of apples, and they were piled amazingly and dangerously high...and I only used 7 of the 8...phew!) and I would also add 2 tsp. cinnamon instead of 1 tsp (the recipe doesn't mention using any...so I tossed it in with the apples before stacking them up. I also threw in 1 tsp. of nutmeg for good luck) There's a couple of things you may want to know about my interpretation of this pie as well (seeing as I usually have to interpret because of various food allergies) I used soy margarine instead of butter (because of the dairy) which probably made it a bit different, but still yummy...and I didn't peel my apples (of course that has to do more with laziness than any kind of food allergies)

And the Pièce de résistance? I made an executive decision that instead of making the lattice for the top, I would use my cookie cutters to cut shapes out of the dough and pile those on top of the pie in place of the lattice. I used fluted circles, hearts, maple leaves and apples...which really delighted me to no end and made this one of my favorite pie creations to date...

And it's great for breakfast too.

(just in case you wanted to know that)
Written by Chickenbells at 8:05 AM

oh it looks so yummy!

Ooooooooo!! Miss Sadira, apple pie YUMMIe! I am going to try that other recipe too, unless a granny smith calls me first ;)

You know what? I love the cookie cutter topping idea. And I am so with youm pie is so much for the season. Cake is a bit more, springy ;)

I have missed visiting you. I am eating an ooooober spicy lunch while catching up! xoxo

YUMMMMMMMMY. Apple pie, fun to make fun to bake fun to smell heaven to eat....with homemade vanilla ice cream for a super special treat... *OR*
perfect for breakfast (wink wink) Heeeee!
(I swear i can smell it!)

Granny Smiths are like the best apples ever. I love the tart sweetness. And the pie looks super yummy!

ahhh
no wonder!
i could smell something delicious was cooking up over here... now i see i am right! send a slice of that heaven here please!