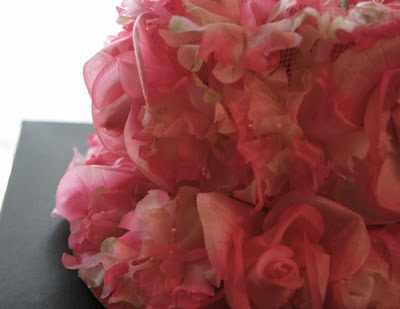 Teaser: Because I promised you I would show you some other new hats I happened upon not too long ago...and I didn't have time to take a picture of myself in one, because when you see them you fall off your chair and then you will heartily demand it. Because I know you that well. You may even pump your fist into the air with excitement. I did that when I stumbled across these (maybe I know myself that well, and I'm just projecting) In all honesty though...I must admit that it's been a stellar year for hats. I am considering writing my congress man to push for an initiative to rename this "2009 The Year of The Hat" (I figure it's as important as changing the pictures on the pennies...)

Mostly Wordless: Because that is exactly what happened when I plugged in my external hard drive this morning (the one that holds ALL of my pictures?) so I could upload pictures for this blog post, and not a darned thing happened. I then opened my mouth and nothing came out...and I pumped my fist in the air (and not in a great. "Hey I found some very fantastic vintage hats!!" sort of way) (more of a, "I hate this stupid external hard drive! It's been nothing but head aches...I don't know how to take care of it, or set it up...what the heck?!?!" kind of way...because I feel exactly the same when something goes awry with my technology as I do when something goes awry with my car...totally helpless...which usually also makes me want to cry real tears.) (and sometimes hold my breath until I faint.) And which made me call Rich who suggested I bring it by the gallery...which I did (after running to get Taste of the Wild food for the new kitty...because I think the other kind is making his tummy soft...and by soft. Well, let's just say I clean the cat box a lot and spray room freshener a lot and this food is solidifying things in that area...Although, I have to admit that usually I like to buy food that maybe my cats would be able to catch themselves in the wild, and there's a picture of a puma on the front of this thing...along with a deer with a big rack [and by big rack, I mean horns. What? I've been watching Will and Grace a lot lately] This new food has some sort of venison flavors, hence the deer...[I'm not sure either of my cats could take down a deer...mostly they're just pissed off at each other right now...hence the puma...] and berries, which I've never seen my cats interested in, and no grain...which could explain why they don't come to the mill with me when I take all my wheat in at the end of the season...although if we're on the subject of food I really have no excuse for the chicken and lobster flavor of canned food I just bought them...because I sure as shootin' haven't seen any kitty sized wet suits hanging around Foolsewoode lately...but I personally love lobster...maybe I should make them some bibs??)

Anyway, if you're still reading...I'll spare you most of our conversation because this is supposed to be Mostly Wordless...but really, I only title things that because I think it's ironic in my case, but here's the jest:

Rich: Um...why is the cover all popped off and weird on this drive?


Sadira: Oh...I have no idea. Or probably because I dropped it on the floor. One of the two.

S: It's only because I tripped over the cord. I hate this thing!! Why do I have to be such a prolific photographer and I don't have room to store all my photos on the Mac drive?! (this was accompanied by me throwing my arm over my eyes in a very dramatic manner) Why are computer drives so small?!?! (seriously. I almost dropped over when I realized that I couldn't store all of my photos on the computer...what the? Poor Rich, he had to witness that too.)

R: Oh...and your USB port is bent...that could be a problem.

S: Well, now how could that possibly happen?!

R: When you dropped it?

S: Actually, the truth was that it fell over off of the TV tray (yes, I use a TV tray for my Mac when I'm at home...whatever. It's vintage and very cute, and I don't have a lot of room at the house) you know? After I tripped on the cord? (only because the cord is in a very high traffic area and I can't remember it's there and I almost kill myself constantly on this thing...so, as you can see, it's really not my fault at all)


R: Well. It's popped up on my computer just fine (of course it has...traitor!) I'm just nervous about unplugging it, because it may never work again if I do that.

S: Ugh! Technology is so confusing!!
(stomp stomp)
(that would be my feet at this point)

Luckily, Rich is a good sport and mostly use to my technology hysterics by this point...and hardly ever rolls his eyes in front of me...of course, I may not be able to see him because usually during these exchanges I'm either waving my arms around a lot or sighing heavily and looking away in a rather dramatic manner. He also talks in a low quiet voice.

I wonder what that means?

Well, it's soothing at any rate.

The Bottom Line: I am going to have to buy a new 1.0TB external hard drive (because I've almost filled up the 500g and it would be silly to get a 750g if I've almost used the other one up) which costs about a scillion dollars...and Rich is going to transfer all my stuff over to one of his extra drives...until mine gets here. Which means I'm once again going to have to reorganize my iPhoto...and let's just say IF I have to reorganize my iTunes again? I may have to take a break to have a fit.

I'll warn you though before that happens.

Maybe I'll also put on one of these hats...because they may be the perfect thing to have a fit in.

What do you think?

Written by Chickenbells at 11:42 AM

Categories: my random life, people I want to know forever..., what'd you got?

You have me laughing so hard! I swear technology is supposed to make our lives easier, yet my life has never been more complicated. I'm trying to start ebay again and I can't start because I have to "do this before I can do that, yet I have to do this other thing before I do the other thing" and so on. I think we all feel your pain. I lost alllll my photos when my computer crashed last year. I'm still trying to learn how to "back up"

Can't help you with iPhoto because Apple hasn't seen fit to port it to Windows (yet... ;-) but I got tired of having to rebuild my iTunes playlists. I now put one-word tags in the Comment field, then build a smart playlist that includes any song with (for example) "Emo" in the comment field. The comments are actually stored in the MP3 file itself, so no matter what happens to my iTunes library, all I have to do is re-create the half-dozen or so smart playlists and the songs pop into them all by themselves. Magic!!

Keep in mind...I am saying this in a low and quiet voice.

The USB was in fact bent.

Currently I have 2 500GB desktop drives and 2 500GB portable drives hooked up to my computer. Primaries and secondaries, but I am a former network operations guy. ;)