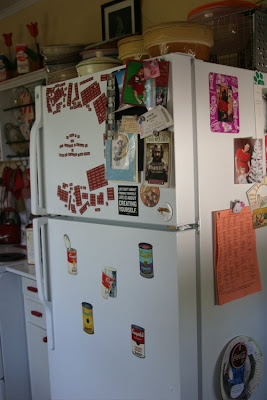 That's the happy sounds of a new fridge coming from the kitchen...not too loud, which is good as the kitchen is just a stones throw from my bedroom...if you were able to throw a stone through a few walls and a bathroom that is.

I'm not necessarily as thrilled as I was when I bought my previous fridge, but I think we've already covered that.

This is a small model.

I've actually had to cull the magnet collection and redesign the fridge fun...but, with all the food I had to throw away, perhaps it's just part of reorganizing?

I'm sure it will be perfect for the cat and I...and perhaps for some big food parties if I really plan ahead and learn how to stack and organize well.

While I'm happy that the fridge is here I have to say, I was very stressed with the delivery of this new family member however. I was assured by Home Depot that the delivery company would contact me the night before the fridge would be here (which was already THREE days from when I ordered and paid for it) I started calling the Home Depot at 6pm when I hadn't heard from anyone...had to call three separate times, and on the fourth time, finally got someone on the phone that would help. Appliances was not her department, but she assured me she would call back in a half hour with an answer. An hour later, someone who kind of knew what was going on called to happily inform me that her information would be redundant as the delivery company MUST have called me because they were already closed for 20 minutes.

I assured her that they did not.

She looked on her computer and said they did...and it was a confirmed delivery between 11 and 3 the next day, and how much she wished I'd called earlier and she could have helped me (even though I'd begun calling an entire hour and a half earlier?) I told her that I had heard nothing from them, and that I had to work between 11 and 3 the next day. She suggested I get a trusted friend or neighbor to come over and watch for the delivery.

Who would do such a thing?

I know I own my own business and I suppose in theory I could close up shop and run home any time I wanted to...but what does the average person who is employed do in a situation like this? She suggested I call the delivery company in the morning and they could help.

I called the GE delivery service number and they said that they could do nothing because they didn't have a number for the delivery guys (yeah right) and that they are obligated to call me at least a half hour before they showed up.

Like they called to set up the delivery the night before?

I left a hand written note before I left for work on my door.

Luckily the delivery guys probably are contractors and they called quite a while before they showed up to let me know, and to also let me know that this was their number if I had any problems getting there. Well, thank you! Thankfully Rich had some free time and agreed to run up to Foolsewoode to oversee the drop off and delivery and the cat (she just adores him...so that's a bit unavoidable) He reported that everything went very smoothly, the guys were very nice, there was a lot of icky fuzz all over the place because of the old fridge, the new refrigerator sounded fine, and looked like a big white box that cooled food down...I had to wait until I got home to listen and see it, but it really is fine.

But, I'm still kind of floored by customer service these days. It's nearly impossible to nail anyone down on exact times...or even watch people follow through on their promises. And everyone sure is sorry about everything. It feels like when you do anything like this, you're having to constantly call and check and call and ask the same questions over and over again. I guess it always floors me that you spend quite a bit of money on a service and then you have to do a lot of the follow up work...I also realize that a lot of the people you talk to on the phone now days can not be held accountable to what is going on. But my question is...who can be held accountable?

It's making me really examine how I do business though, so that I can be proud of how I treat my customers.
Written by Chickenbells at 8:22 AM

Categories: my random life, what'd you got?

I, too, work in customer service and am acutely aware of the service - good and not-so-good - that I receive from others (like that of the snotty 20 year old who "helped" me in a shop the other day). I think such people exist to remind the rest of us to do our jobs well.
Glad to hear the fridge finally arrived...