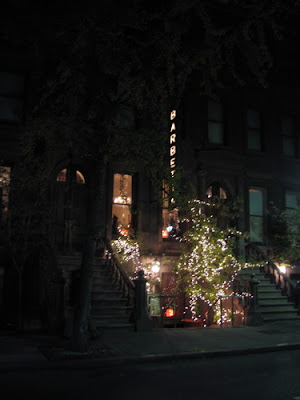 Look at that.  Isn't that quaint?
It was the front of a little brownstone on our block, all decorated for Halloween.  We were staying at Restaurant Row (I know, perfect for people such as myself) (perfect in the way that I almost eat nonstop while on vacation) at The French Quarters.  It was a lovely homey hotel that was mighty easy to come home to at the end of a long day.
They also had a Keruig in the room, so that was extra special.  They use L'Occitaine as their toiletries, which is one of my favorite companies ever for body products...and they serve breakfast daily...including New York bagels and hard boiled eggs.
It was very hard to come home and not have someone make me breakfast and coffee. 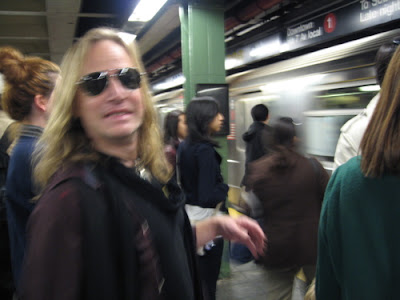 And this is Dave.
He's a little blurry cause' we're getting onto a subway to go to The Village, and I'm totally excited so I'm probably shaking.

Dave is a very good friend of mine from days gone by, and whom I just thought to try to reconnect with on facebook on total accident a mere three weeks before my New York trip, and even before I knew myself that I was going.  We reconnected, and oddly enough the next day he was on a plane to visit his parents here in AZ and we saw each other for the first time in ten years...and then *poof* here I was in New York seeing him again!
Isn't life amazing?
He's been hanging out in New York working off Broadway this whole time.  I am wonderfully proud of him and miss him terribly all at the same time.  Dave is one of those people who has a piece of my heart with him...and that's good, because I know he'll take care of it no matter how far apart we are. 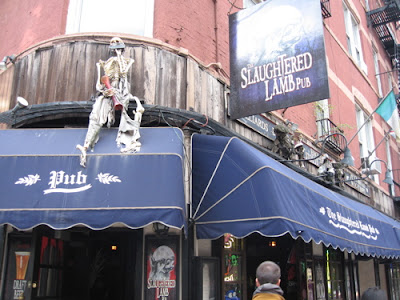 And this is a picture of the Slaughtered Lamb Pub.  Dave said it is a pub with the theme of
(wait for it)
Scottish Werewolves!
(there's a werewolf on the sign, but the sun was apparently in the way...silly sun.)
Pretty narrow target market, but there you go.  We didn't go in as we were on our way to The Red Lion to listen to music, but I here tell there's a dungeon in the basement.  With skeletons.
And I thought Whiskey Row was wild... 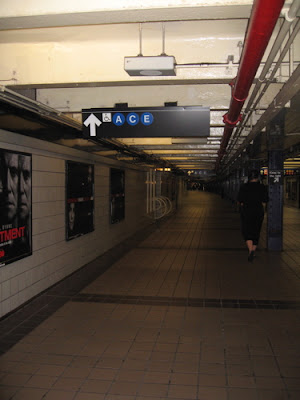 This is a picture of Kari walking in the subway...we were just about to start our walking tour of New York, only we didn't know it.

We jumped on a whole slew of subways during the day, but we ended up walking down Madison Ave to the Met, and then part of Central Park, and then they were working on Bleeker St. (and some other stops) in The Village and we had to get off of the subway stop at the end of the line at the Brooklyn Bridge...and walk to Bleeker.
That was the part of the tour that took us through China Town, Little Italy, The Bowery (where CBGB is which happens to be the birth place of punk rock music...or rather was, apparently they lost their lease and the landlord asked them to go.  The owner smartly replaced the walls and took the originals with him as they were signed by a whole slew of famous musicians.  HA!)...we stopped to eat at a pub and then rode back to our hotel where we both collapsed.
Seriously. 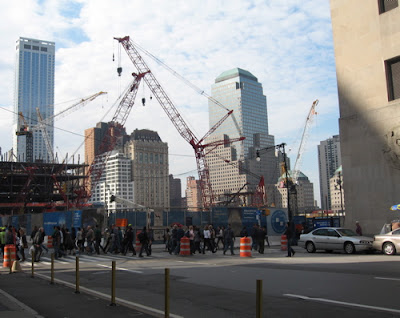 I wasn't as emotional as I thought I would be.  I'm not sure why this is but not only can you not see the actual site due to all the construction going on for the memorial, but maybe enough time has passed since the attacks and it's not so fresh for me anymore?  I'm not sure.  It was amazing to be down there standing near the site though, and just remembering. 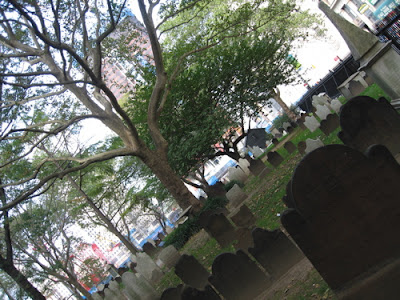 And then across the street was St. Paul's Chapel, which is a pretty amazing little old old old church.  The church housed the people who were part of the rescue effort for 9/11 gave them cots, and a place to decompress.

It is a pretty amazing little place and the graveyard is full of old little headstones...I mean, old like 1700's old. 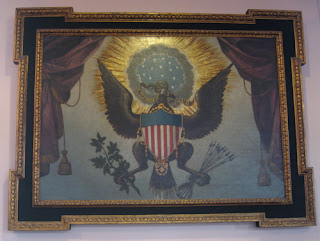 I also spied this very wonderful old American Seal painting on the wall in between all the 9/11 memorabilia and do you know what it was hanging over?
George Washington's pew.
As in, father of this country George Washington?
Yeah.  That guy.
Apparently he was inaugurated at this church during his first term of President of the United States, and continued to worship here until they moved the capital to Philadelphia.
Who knew?
Seriously.  I stood there a bit giddy with the history of the whole place.
Totally amazing. 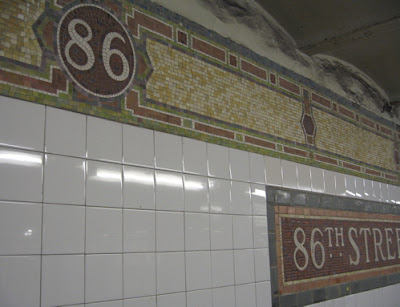 And there's 86th Street in all of its subway mosaic glory...

I'm not particularly connected to 86th St. but, I absolutely love all things mass transit and I simply adore the subways in New York...a love affair that started during my first trip 19 years ago, and I was happy to find out, continues to this day.

Plus?  All the tile work is beautiful. 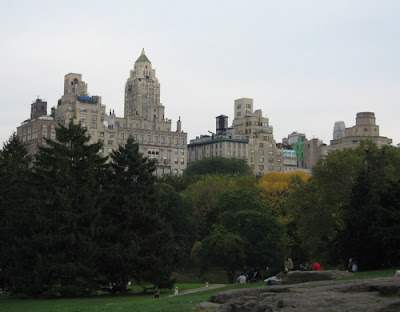 OK, little isn't the word for it, but we strolled through bits and pieces the whole week enjoying the changing of the leaves and the little bit of solitude in a busy city...squirrel watching.
They also have a zoo in Central Park, in case you're wondering. 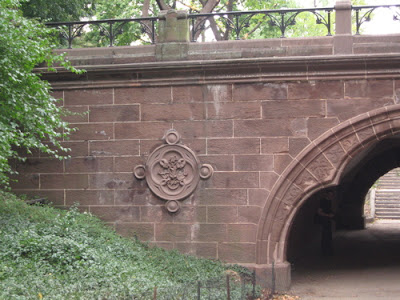 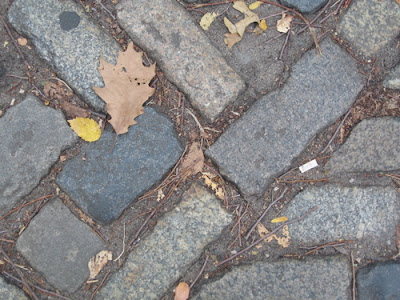 And proof of fall laying among the cobblestones surrounding Central Park. 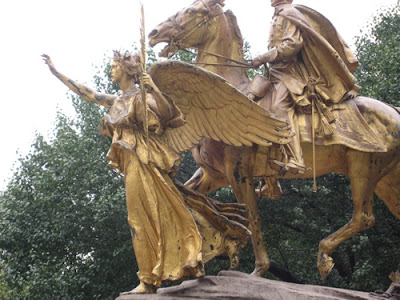 And one of the many statues that line parts of Central Park.
I believe this one is the angel leading the soldier down Fifth Ave.
OR...perhaps he's my knight (or soldier...whatever, I'm getting older we don't need to get all picky at this point in the game) in shining armor and he just asked directions to Cartier so he can buy me that Eternity Bracelet and win my heart.
Oh yes, I'm totally sure of it...
(I probably should have tipped her)
(then again, he appears to be headless, so maybe she's just more like a guide dog.  Damn.)
Written by Chickenbells at 3:41 PM